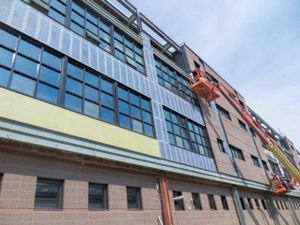 In the 20th century, wall assemblies discretized into multi-layered systems with each playing a distinct role. Each new layer arose with the emergence of building science technology, including rain screen design principles and the evolution of building materials. What began as an assembly of one primary material offering thermal mass, weather protection, and esthetics, fragmented into a series of components, including cladding, thermal barrier, air barrier, vapour retarder, weather resistive barrier (WRB), and separate structural wall.

Driven by economics and construction material development, the 21st century brought about an inversion to this trend. Today, there are a plethora of multi-functional material options, including structurally insulated panels (SIP), insulated metal panels (IMP), and integral weather barrier sheathings, all of which reduce the number of discrete layers to limit field labor. They improve quality control (QC) while compressing construction schedules.

Foam plastic insulation manufacturers realized the physical performance of their products presented an opportunity to capitalize on their existing characteristics beyond just thermal properties. The origins of this trend emerged in the 1970s and 1980s when manufacturers and trade organizations promoted features such as fire exposure behavior of certain polyisocyanurate (polyiso) insulation boards to eliminate the need for a thermal barrier.1 This was marketed as a differentiator between polyiso products and extruded polystyrene (XPS) products.2

When modified and/or accessorized properly, the same insulation board providing thermal resistance may serve as an air, weather, and/or vapour barrier. Select foam plastic insulting sheathing (FPIS) products merge all barriers and the wall sheathing into a single layer; these FPIS systems are the focus of this article.

All-in-one products pose drawbacks, as well. Difficulties may arise due to multiple factors, including the inherent nature of foam plastic as a combustible material, the lack of structural capacity,3 the suitability of the FPIS substrate when detailing transitions, and the potential for dimensional instability. Additionally, by their very nature, all-in-one products lack redundancy; a failure in one component creates a full assembly failure.

You May Also Like  How to stop: Parapet and soffit construction solutions

Insulting sheathing, as defined by the National Building Code of Canada (NBC), “Insulation that is uncompressed and continuous across all structural members without thermal bridges other than fasteners and service openings.” For the purposes of this article, insulting sheathing is installed on the exterior surface of the building envelope, and should have a minimum thermal resistance of R-5 in the core material.4 FPIS simply use foam plastics as an insulting sheathing.