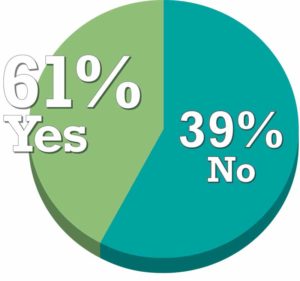 When it comes harnessing social media for professional uses like networking or research, readers were all for the various platforms. However, privacy was a big concern for many of the participants.

One mechanical estimator felt “it is the easiest way of getting the word out there if anyone is looking to hire talent as they get prospects from a bigger pool.”

“I like the instant updates on seminars, achievements and articles of interest in LinkedIn,” said a project manager from Alberta.

A construction specification representative from Alberta loved the “ability to reach a large breadth of contacts quickly,” but was concerned about media supplier security.

His female counterpart said it helps “expand my business and make new contacts.”

An Ontario architect was wary that “social media can distort people’s skills.”

Some of the respondents do not find social media useful and said there were “too many forms of communication and not enough person-to-person contact.”

“There are plenty of opportunities, the main problem is that one has to learn to navigate through these apps on one’s own and the learning can take time and is also conducive to errors,” said a consultant from Ontario.

A construction specification representative cautioned that while social media is “a good communication channel to increase awareness on relevant topics, it is getting to a point where the posts are not all legit but corrupted by the ‘marketing’ aspect of the industry. If I wanted to hear propaganda, I would go to a tradeshow and read brochures and ads.”

Aside from work/life balance, there were quite a few reoccuring themes when we asked what frustrated the participants at the office. One Ontario business developer expressed her angst at the “inequality for women in construction.”

This was echoed by an Ontario design and specification manager. She wrote, “How women are still looked at in this industry, it has come a long way…but you still encounter the silly person from time to time.”

A B.C. architect had a similar answer: “Gender equality–women have to work twice as much to prove themselves for less money than my male colleagues.”

Apart from gender inequality in the construction industry, respondents were concerned about the state of the economy.

An Alberta architect said, “The economic downturn has reduced our professional opportunities locally.”

“Satisfying spreadsheets rather than meeting the client’s expectations,” wrote a project manager from Ontario.

Government red tape was also cited as a source of frustration by the participants. A Saskatchewan project manager expressed his ire at the “current wage freeze imposed by the provincial government for nonunion members.”

There were specifiers who complained about “unreasonable expectations from general contractors (GCs).”

A project manager was concerned about “customers selecting contractors without project specifications and making a decision based on price.”

“The diminishing quality and availability of skilled tradespeople” was another concern.

Unrealistic project timelines and the tendency to value-engineer were also mentioned.