By Andrew Schmidt, ASA, and Ajith (AJ) Rao, PhD, WELL AP
The sheer number of acoustic metrics, criteria, and associated abbreviations can be overwhelming, confusing, or sometimes misleading. This article provides an overview of key acoustic metrics and criteria commonly referred to in various building codes, design guidelines, and standards. Many of the acoustic terms described within will look familiar as they appear frequently in literature related to the Leadership in Energy and Environmental Design (LEED) program, International WELL Building Institute, the National Building Code of Canada (NBC), and numerous other standards or product documentation.

In this article, the authors hope to lend clarity as to the comparative strengths and weaknesses of these various acoustic metrics and provoke critical thought as to which are most appropriate for different building types.

Sound transmission
To understand acoustics, it can be useful to imagine waves washing up on the beach, water pushing itself forward. There are short, little waves washing up quickly on shore. There are larger waves further apart, and some medium-sized waves somewhere in between. All these waves flow in together, slowly, simultaneously, in the same medium—water.

When thinking about the physics of sound, one can take those same waves, with the same variety of size and length, and speed them up. They travel at the speed of sound (343 m [1125 ft] per second) together, simultaneously, in another colourless medium—air. Airborne sound is a pressure wave in air; when that wave strikes a surface at the speed of sound, it hits with a high amount of energy, and that pressure wave in air will go through objects, often by force.

Most people hear wavelengths as long as 17 m (55.8 ft) and as short as 17 mm (0.67 in.). Those smaller 17-mm wavelength sounds are easily stopped by a relatively giant layer of 16-mm (5/8-in.) gypsum wallboard. Conversely, a tremendous 17-m wave would easily pass through a comparably small 250-mm (10-in.) thick concrete wall. This is sound transmission. Sound, like water, is adept at sneaking through and around things.

You May Also Like  Using reflective foil as a vapour barrier

The following paragraphs break down the various key terms and definitions related to sound transmission.

Transmission loss
Transmission loss (TL) is the difference between the sound energy incident upon a material or construction assembly and the sound energy transmitted through the material or assembly. It is measured in a laboratory under specific room acoustic conditions with sound energy generated by a sound source on one side of a partition (i.e. the source) and measured on the other side (i.e. the receiver). Results are published in one-third octave frequency bands.

Noise reduction
Defined as the difference between the sound pressure level produced by a sound source on one side (i.e. the source) and the other (i.e. the receiver) of the construction assembly being evaluated, noise reduction (NR) is similar to TL. However, it is measured in the field, rather than under controlled laboratory conditions. Consequently, it accounts for sound transmission via flanking paths in addition to what is transmitted directly through the material or partition.

Sound transmission class
A single-number rating that is ascribed to the transmission loss spectrum of a construction assembly under laboratory conditions (i.e. no sound flanking paths), sound transmission class (STC) values are determined by fitting a specified contour, weighted to the human hearing spectrum, to one-third octave TL data (Figure 1). Essentially, the STC rating of a material or assembly is the approximate TL of that system at 500Hz. 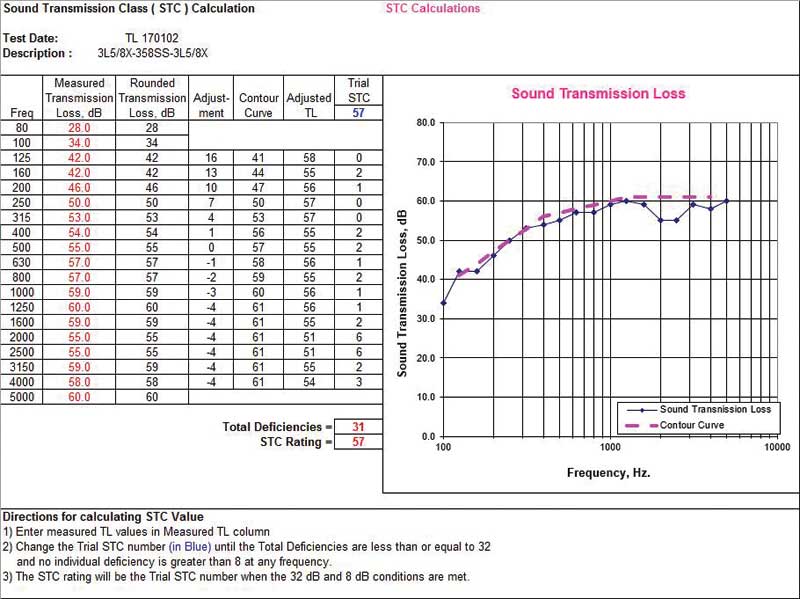