By Steve Londry, B.Arch, Dip.Arch.Tech, LEED AP
The English language is complicated, and misinterpretation of written communication is pervasive. Without the added layer of subtleties of speech tone, body language, and context, many written sentences can be easily misinterpreted. For example, “You can’t have too many cats” has two opposite meanings—it could be a warning you should not have more cats than you can manage, or reassurance it is OK to go out and get more felines.

The interpretation of words also follows the medium in which it was delivered. There is somewhat of a spectrum of precision in word choice through various media. I would suggest building codes and legal statutes are the highest levels, as every word was selected with great precision for optimal clarity. Construction documents are at a middle level, and e-mail at a lower one. Cellphone texts are traditionally the lowest and most informal, while emojis represent a new level of ‘low,’ eschewing words entirely and essentially creating context-specific communication meaningful only to the parties involved.

Within construction contract specifications, there is another related spectrum with multiple layers, from highest to lowest precision:

When there is some confusion about the meaning of a word or phrase, interpretation should be made by giving appropriate consideration to the context within the contract. I would suggest a phrase could have a different meaning depending on where it is located in the construction contract. As a simple example, “provide new materials” stated in the General Conditions does not preclude “provide salvaged timbers” in Section 06 13 00−Heavy Timber Construction. These two statements are neither a conflict nor a disconnect. The General Conditions establish broad sweeping requirements over all Work Results, like a blanket on a winter day. It is up to each technical section to state the exceptions, and include those written details unique to that section, like “add shearling slippers on especially cold feet under the blanket,” or “the blanket shouldn’t cover the head.”

You May Also Like  Architects and Specification Writers: Part 1

Commonly, the General Requirements will include a requirement for products to be installed “plumb, level, and secure.” The General Requirements establish fairly broad/general statements in the specifications and, typically, they would not explicitly define the tolerances for plumb. Where appropriate, particular tolerances should be stated in a technical section applicable to each Work Result. The specifier should consider the context of the “plumb” requirement, and include actual plumb tolerances for anything better than what would universally be considered as typical. 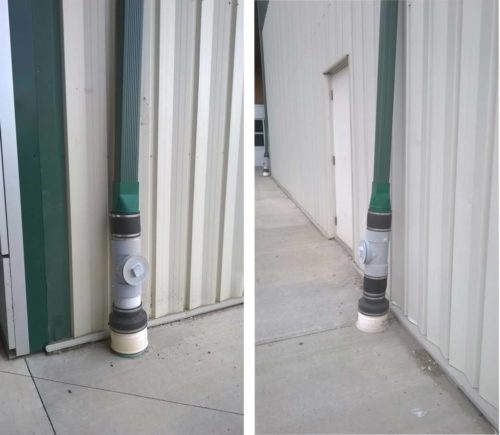 I have not seen the contract documents associated with the rainwater leaders shown at right, but I find the construction noteworthy—not because there are deficiencies, but simply because it is an ugly installation detail. The photos were taken along a principal path to a main public building entrance—hundreds of people walk past these leaders daily. Putting aside the ugly connection details, they are not plumb in either axis, and are immediately adjacent to vertical profiled metal panels, which make their out-of-plumbness even more apparent.

Was the General Requirement statement “install plumb” sufficiently achieved? Perhaps. Measured over the full rainwater leader height, they are within one degree of vertical. However, in the context that matters to this situation (i.e. the experience by the public of the rainwater leaders), they appear drastically out-of-plumb. I would suggest in this case the specifier should have considered how the users will experience the Work Result, and then established the appropriate tolerances in that technical specification section.

Consideration of the context always tells a truer story. When writing specifications, one should consider “Does that broad statement in the General Conditions fairly explain what the Work Result needs to be on this particular project?”—especially from the perspective of the users’ experience. Conversely, when interpreting a sentence during contract administration, the context must be considered within the multiple layers of a project manual. The contract documents are fully understood only when looking at both the big picture and scrutinizing the details simultaneously.

Steve Londry, B.Arch, Dip.Arch.Tech, LEED AP, is principal of Construction Specification Solutions in Edmonton. He has volunteered for the CSC Education Maintenance Task Team (EMTT), has more than 20 years of experience in the construction industry, and has worked with two CSC presidents and some of the finest specifiers in Canada. He is also a member of the Construction Canada Editorial Advisory Board. Londry can be reached at steve@specification-solutions.ca.