By 2027, the global logistics market is estimated to reach $17.2 trillion CAD (USD $12.9 trillion).15 This means more warehouses, more server facilities, more distribution centres, and more concrete. However, the pressure to build quickly almost eliminates any chance for significant cement reduction due to the required extended curing schedules for older Marin County-style16 approaches to concrete curing requiring delayed day-of-strength by as much as 56-days of curing, versus the standard 14- and 28-day programs.

Most will try to cure concrete with the traditional topical surface curing previously mentioned. This is a fiasco waiting to happen when building low-carbon concrete. Instead, builders need a different approach which properly respects the new water demands of low-carbon concrete. Unlike traditional curing, which attempts to delay moisture evaporation or supply water at the surface of concrete, internal curing (IC) provides water from within the concrete, thereby increasing reactions of cementitious particles and creating the environment suitable for producing strong, low permeability concrete. 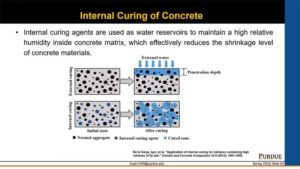 Historically, IC has been conducted by using expanded shale and clay. However, in the last decade, cellulose fibres and perhaps most especially liquid nano-sized colloidal silica have been shown to be a practical method of supplying added curing water. In 2018, at CSI Construct in Longbeach California, the world got its first glimpse of large-scale internally cured nano silica projects and early research from the presentation, Changing the Language of Concrete.17 Since then, there has been tremendous research on the use of nano silica in cementitious grout coats,18 internal curing studies at Purdue University,19 Concrete North at University of Alberta, various state and federal infrastructure studies, as well as at University of Akron, The National Center for Education and Research on Corrosion and Materials Performance (NCERCAMP), and the National Concrete and Corrosion Symposium (NCCS)20 to build upon the industry’s understanding of liquid colloidal nano silica as one of the most advanced commercially available curing practices. Cellulose fibres and nano silica infused cements both provide meaningful aid against high alkalinity in concrete and meeting greater water demands. Using the right type and proportion of nano silica can not only increase compressive strength, but also influence pore structures and decrease permeability. Similarly, when removing large percentages of cement for low-carbon concrete buildings, this increased pozzolonic activity also speeds up curing to reduce dependencies on 56-day schedules, as with older surface style curing. 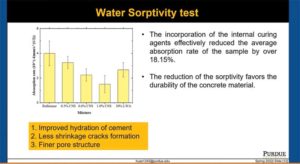 Brookfield Properties’ 415 Natoma in San Francisco, logistics centers in Bradenton, Florida,  Adidas Fifth in New York, and many other projects have benefited from internal curing with liquid colloidal nano silica SCMs to increase quality, reduce schedule, and maintain internal water for more complete hydration. With colloidal nano silica, help in hydration voids are reduced throughout the entire matrix of the concrete, including the surface. With fewer voids at the surface and significant strength gains, internally cured nano silica concrete can be ready to receive coated or polished concrete floors in shorter time frames. At a distribution centre in Florida, internal curing with nano infused cements allowed for polishing to begin the same week as placement and reduce global warming potential (GWP) by 33 per cent removing time and carbon from the construction schedule. This increased schedule flexibility, made possible with cements infused with nano silica, present an opportunity for large data centres and other schedule-intensive builds to remove meaningful amounts of cement without requiring the same schedule extensions required by older surface curing from the last century.

Nano silica can also bring its own unintended cobras if a too simplistic approach is taken. To begin with, saying “nano silica” is a lot like saying “automobile”—there are many types of cars, trucks, and motorcycles, each with their specific functions. Getting proportions on size, dispersion, and dosage is key. If off, the concrete can lose some valuable compressive strength. However, if the silica dose is just right, cement replacement is possible with just local sand and aggregate when traditional materials such as, silica fume, slag, or fly ash are not available; or with  the use of fly ash, slag, and other dry-add pozzolans when they are available.