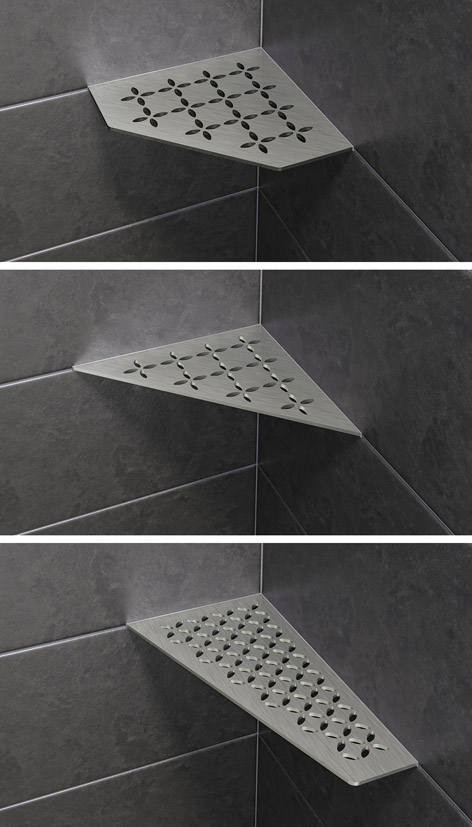 Another method simply extends the thickness of an existing ICF design. The panels have the appearance of a standard-thickness ICF that has had a flat slab of additional EPS added to the exterior side, although in fact they are moulded as a single unit. The engineering of the block remains unchanged from the standard blocks, with top interlock and mating bottom indentations along the inside 62.5 mm (2.5 in.) of the panel thickness, and webs embedded to the standard depth from the inside surface. Due to the thickness added to the outside surface, extra-long screws must be used for attaching interior and exterior finishes to the wall, with the manufacturer supplying a table of appropriate screw lengths.

The added-thickness panels are available in sizes ranging up to 200 mm (8 in.), resulting in a theoretical maximum R-value for the complete wall of about R-66. Panels can be paired in any combination of thickness to make blocks. However, this versatility comes at a cost—they are only available as unassembled panels (i.e. knock-down [KD] panels) that must then be assembled into blocks. This reduces shipping costs because more material can be transported in the same space, but significantly adds to labour and construction time because the webs must be inserted onsite to assemble complete blocks before construction can begin.

Another option involves ICF panels that have been fully redesigned to be thicker. In this version, the mating structures on the top and bottom cover the panels’ full thickness, and properly mate without field-cutting. Panels that are 82.5 mm (3.25 in.) thick add about 38 mm (1.5 in.) of insulation to the system, increasing insulation R-value to R-30, in factory-assembled blocks. Webs are spaced 200 mm on-centre (oc), and are embedded in almost 20 mm (0.75 in.) more EPS (measured from the inside surface) than in standard ICF panels, increasing the panel’s strength against web pullout. Web anchors are at the same embedment depth from the outside surface as in conventional ICFs (i.e. 16 mm [0.6 in.]), allowing attachment of finishes using standard-size screws and other familiar techniques.

Canadian examples
One of the first projects built with these thicker ICF blocks is a 930-m2 (10,000-sf) two-storey office building in Collingwood, Ont. It is the first structure the designer/builder, Royalton Homes, has ever constructed using ICFs. Company vice-president Sam Chaaya and his partners selected the material primarily for its high R-value and the energy efficiency it would provide the building. Temperatures in Collingwood went below –22 C (–8 F) two of the past three winters, and rose to more than 35 C (95 F) this summer. Royalton was also attracted by the durability of a concrete structure.

The foundation was built with conventional 62.5-mm (2.5-in.) ICFs, switching to the thicker forms for the two above-grade floors. Chaaya’s assessment was the new, wider blocks are easier to build with than the conventional ones, and it sped up construction on the upper floors. According to Chaaya, mating between block-tops and bottoms is more precise with the 82.5-mm (3.25-in.) ICFs due to the wider mating surface, so it is easier to keep wall alignment straight, resulting in faster construction.

He also observed the enhanced-performance ICF blocks seem stronger than conventional ones due to the increased EPS thickness. For the Collingwood project, the crew almost suffered a blow-out in the conventional block on the foundation level, where they were using 62.5-mm (2.5-in.) ICFs. They had cut a section out of the interior side of a block to allow for a column, and the missing web weakened the block’s integrity on the exterior side. (It is a common practice to cut the ICF forms to make columns and other structural elements. These areas should be strapped with extra bracing to prevent blowouts). At this point, they should have braced the remaining panel to make up for the strength lost because of the missing web, but this routine precaution was omitted (possibly because it was their first experience with ICF construction). The exterior EPS panel bulged outward, but it was braced from the outside before it actually ruptured or leaked concrete.

You May Also Like  ASHRAE 90.1: The future of Ontario’s energy efficiency

By contrast, Chaaya has seen no such problems with the newer, thicker ICF blocks. He also noted the corners of the new system seemed stronger than in conventional blocks, and said the fact the legs of the angle are longer saves a small amount of time.

Royalton initially expected construction cost to be about 30 per cent higher than wood-frame construction, but felt the energy savings would be worth the investment. Once construction got underway, the company found the actual differential in expense would be considerably less, closer to 10 per cent.

Specifying tips
The most common problems with ICF projects occur during concrete placement, and are largely avoidable when the formwork is designed with a consciousness of the construction process.

Concrete is as heavy in its liquid state as it is when hardened. The block must be able to bear the pressure of a column of wet concrete. It depends on the integrity of the EPS panels, the strength and quantity of plastic webs connecting them, and the strength of the EPS slot where the webs are embedded.

The number of webs per block also contributes—all other factors being equal, webs located every 150 mm (6 in.) oc are stronger than webs every 200 mm (8 in.). Further, the deeper the web’s anchor is embedded in EPS, the stronger the block. The web can come within 16 mm (5/8 in.) of the block’s outside surface for maximum inside embedment and high pull-out strength.

You May Also Like  Thinking Zinc: Examining the cladding options

Gary Brown is vice-president of marketing for Toronto-based Amvic Building System, a manufacturer of insulating concrete forms (ICFs) and rigid foam insulation. Including his seven years at Amvic, he is a 22-year veteran of the energy-efficient, sustainable building industry. Brown can be reached at gbrown@amvicsystem.com.

Steven H. Miller, CDT, is an award-winning writer and photographer, and a marketing consultant, specializing in issues of the construction industry. He can be contacted via e-mail at steve@metaphorce.com.

For more on Enhancing ICF performance, click here or here.