On April 15, the world watched as the Notre Dame in Paris, constructed eight centuries ago, nearly saw its end in the historic fire[2] that devoured its roofs. Now, Belgian ecological architecture firm Vincent Callebaut Architectures[3] (VCA) proposes a design[4] for the cathedral that brings history, science, art, and spirituality together. 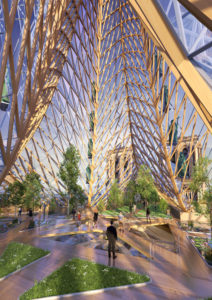 [5]The four hip rafters are oriented toward the cardinal points. Between the four ridges, which give the roof its sophisticated character, their curves reincorporate one above the other the monumental, wrought-copper statues of the twelve apostles.

You May Also Like  Wind design for modular vegetated roofing systems

Endnotes:
You May Also Like  How to avoid common channel glass pitfalls